I’ve owned dozens and dozens of tube amps.  There is a bit of clarity needed when talking about guitar amplifiers and how they are built.  I took some pictures of a few popular models and borrowed a couple off the internet to explain a little further.

The first one is a current Vox AC15C1.  There is a printed circuit board (PCB) that is wave soldered by a machine on an assembly line.  Separate circuit board components are attached with cables to make up the entire amp. 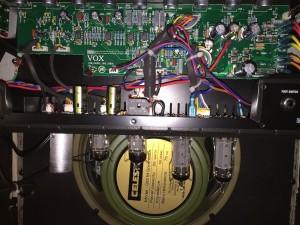 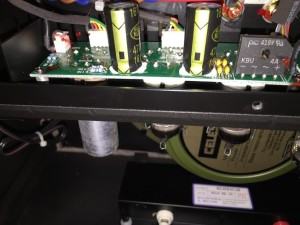 This is the popular Fender Hot Rod Deluxe.  Very similar construction techniques as the Vox, although the Vox is built in China and the Fender is made in Mexico.  Note that the tube sockets are also attached to a smaller PCB, like the Vox, which are then connected to the main board.  The difference is that the Vox tube sockets are soldered right to the PCB, where the Fender has a little bit of a spacer to dissipate the heat from the tubes.  Also, in both of these examples, the control knobs are attached directly to the main PCB.  The Vox has a small PCB that the input jacks connect to, while the Fender input jacks are soldered directly to the main board (making them a pain to replace, trust me, I’ve done this several times). To the credit of the Vox over the Fender amp, Vox uses wiring to connect the sub-board for the tubes, where Fender uses ribbon cables (which are awful).  So both amps are similar but different in their overall construction. 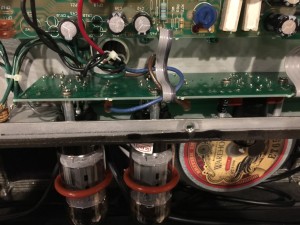 The following 3 amps are all what we would consider “handwired”. though as you will soon see, that definition can vary greatly.

This is the Vox AC15HW (Handwired) model.  All of the components (capacitors, resistors, etc) are soldered by hand to a central turret board.  Connections are grouped and sent to the transformers and tubes as needed.  Tube sockets are separate and mounted to the metal chassis of the amp rather than a circuit board.  There is no strain on components this way, and heat is not directly affecting the other components. Compare to this to the amp at the top that is also an AC-15.  BIG difference in both construction and components.  That’s why one is $800 m.a.p. (minimum advertised price) and one is $1300 even they are both built in China.

This is a Dr Z Carmen Ghia.  It is similar to the AC15 HW in that it is using a central turret board for construction.  It is a simpler design layout so it’s easier to see the components and the wiring to the tubes, jacks, and controls.  These amps are handwired in Cleveland, Ohio. 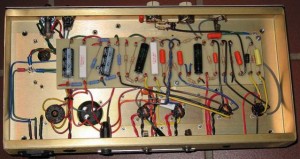 This is my Bad Cat Cub II.  Bad Cat amplifiers are point to point (PTP) wired, meaning each component is individually soldered to the next component(s) in the signal path.  This is the most time consuming and difficult way to build an amp.  The layout of the wiring itself can have impact on the signal when it comes to noise or interference.

Bad Cat even has their own custom components made for their amps. 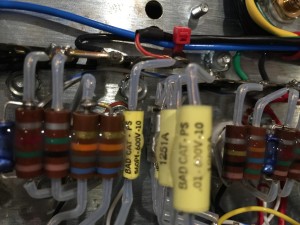 Adding my newest one here, a Bad Cat Classic. This is based on the original Fender Deluxe circuit with some Bad Cat enhancements.  A very simple design that just works 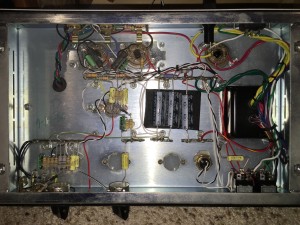 The general construction of a guitar amplifier doesn’t necessarily reflect if it will sound good or bad.  A PCB amp made with top quality components has the capability to sound just as good as a point to point hand wired amp using the same components. For example, in 2016 Bad Cat is releasing a PCB version of the popular Cub series amplifiers.    Since PCB build is faster and generally cheaper, you will tend to get cheaper components on those designs, as they are focusing on quantity over quality.  Handwired amps also tend to be more durable and easier to work on, thus more suited to being worked hard in harsh environments like road touring.